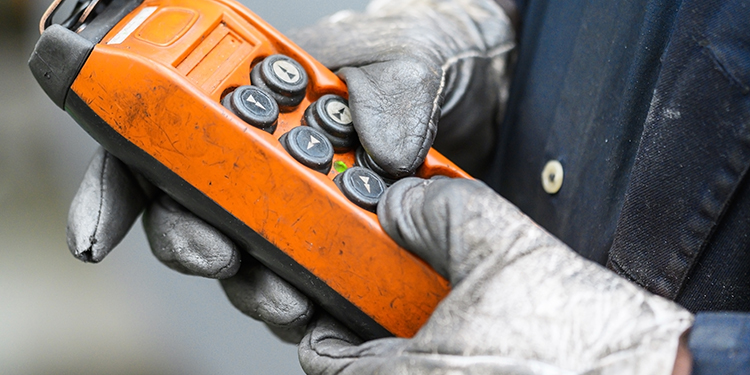 Since the initial advent of wireless, radio frequency (RF) based crane control that relied on one-way communication from an operator-held transmitter to a crane-mounted receiver, there have been significant advances — particularly on the receiver end of the technology. Over the past decade, today’s receivers have evolved to now provide two-way communication, as well as the ability to interface with larger, host networks. The advantage? The ability for an operation to collect a variety of crane performance data points for immediate action, as well as for further analysis to identify usage trends and maintenance needs.

Further, certain receivers today are able to take the place of programmable logic controllers (PLCs), which have historically been used in remote controlled crane installations to handle the process of responding to certain situations, prompts, or faults. Instead, the receivers themselves can determine and direct the appropriate response. This simplifies the design of the crane’s control package, saving time and cost in installation.

The advent of the Industrial Internet of Things (IIoT) and the increasing importance of collecting data from multiple pieces of equipment throughout a facility for remote monitoring also encompasses overhead lifting technologies. Made possible by the latest receivers — which can be hardwired into an operation’s host network — their onboard technologies allow them to communicate performance data via common serial protocols, including CAN bus, Ethernet, or RS-485. In turn, that connectivity gives an operation access to information about each unique crane’s operation in real-time. Data points of particular interest include hours of operation, start-stop cycles, condition monitoring, and safety issues such as an overload condition.

Additionally, the data can be shared via Cloud computing with the crane’s original equipment manufacturer (OEM), giving them the ability to more accurately recommend timing for scheduled maintenance or repairs. This enables service to occur when it is actually needed (as opposed to simply following a pre-determined schedule). It also permits scheduling of downtime in better alignment with an operation’s needs, limiting interruption to operations.

Although some crane owners have concerns about IIoT increasing the need to take cybersecurity measures to minimize the risk of an outsider compromising their network, the potential of disrupting the connection between a crane transmitter and receiver from the network is non-existent. That’s because radio control OEMs always design the communication between the transmitter and receiver to pass through a proprietary, secured RF link that does not appear on a host network.

In addition to their ability to accept communications from the receiver and to signal an alarm that alerts the operator to an unsafe condition, transmitters’ form factors have evolved as well. The latest devices are rugged and lightweight, as well as ergonomic, enabling an operator to hold them for extended periods of time with minimal physical strain or fatigue. They also have been streamlined and simplified with buttons and switches that can easily be manipulated by a gloved hand.

The members of the Crane Manufacturers Association of America (CMAA) represent the industry’s leading suppliers of overhead crane systems. They design, manufacture, assemble, install and service overhead cranes and components. CMAA members, with the combined experience of more than 30,000 crane installations in North America in the last decade, are committed to providing products which focus on safety and innovation. The organization offers a variety of resources—including buyers’ guides, engineering specifications, OSHA Alliance safety tip and fact sheets, inspection and maintenance checklists, safety seminars and more—via its website at www.MHI.org/CMAA.

Workstation Cranes And Monorails: How They Improve ...