Why Emergency Stops Are Required For Powered Below The Hook Devices 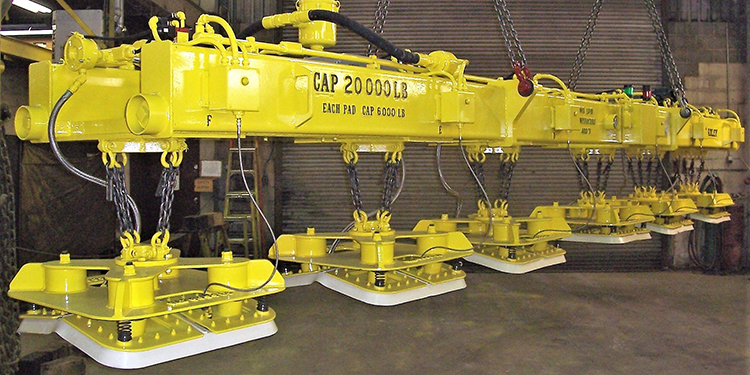 Operations utilizing overhead lifting and handling equipment often use below the hook devices to connect a load to the hook. There are a variety of below the hook attachments available in the market to accommodate a broad range of handling applications, such as loads that are unevenly shaped, exceptionally heavy, or unusually fragile. While some of these units (also known as end effectors) connect to a load mechanically or by gripping it, others require a power source in order to securely attach to an item. These electric below the hook devices include vacuum lifters that utilize an electric-powered pump and sealed pads to create a vacuum when connected to the load, and electrically powered magnets that generate a magnetic current to attach to ferrous objects.

Just as overhead cranes and hoists should be equipped with an emergency stop (E-STOP) or safety disconnect switch that independently cuts off the power to the equipment independently of the regular operating controls, powered below the hook devices should also be likewise outfitted. That’s because in a configuration that provides power to the below the hook device via an integrated overhead crane or hoist circuit, engaging an E-STOP for the hoist or crane could result in the powered lifting device being disengaged. This action would result in the load falling, which creates an extremely high risk of property damage, injury, or death.

Because of this risk, requirements for the application, installation, and usage of E-STOP or safety disconnect switches for powered below the hook devices are included in standards from the Occupational Safety and Health Administration (OSHA) and the American Society of Mechanical Engineers (ASME). These include the following:

In addition to these requirements, there are several key best practices recommended for the safe operation and use of electrically powered below the hook devices. These include:

Want more details about the safe installation and operation of below the hook devices? The Crane Manufacturers Association of America (CMAA) has published the CMAA Specification 80: Below-the-Hook Lifting Device Operator’s Manual.

Requirements For Safely Cutting Off Crane And ...