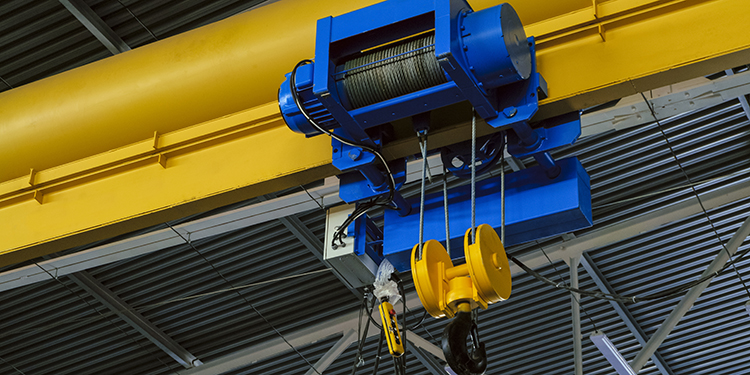 As an important element of overhead handling safety, upper limit switches are electro-mechanical devices used throughout crane, hoist, and monorail installations. When applied to wire rope hoists, upper limit switches restrict their lifting motion at a certain point to prevent an accident. Because hoists are used primarily for vertical raising and lowering of freely suspended, unguided heavy equipment or material loads, lifting the hoist too high could cause the load hook block to come into contact with the hoist or other part of the crane or overhead lifting structure. This is often referred to as “two-blocking the hoist” and can result in damage to the equipment and in the load potentially being dropped. For that reason, there are typically two types of upper limit switches applied to wire rope hoists:

The Occupational Safety and Health Administration’s OSHA 1910.179(a)(60) defines a limit switch as “a switch which is operated by some part or motion of a power-driven machine or equipment to alter the electric circuit associated with the machine or equipment.” Its application “limits equipment motion or takes control of particular functions without action of the operator when a limiting condition is reached,” according to the American Society of Mechanical Engineers’ ASME B30.16 specification.

Additionally, the Crane Manufacturers Association of America’s two specifications, CMAA 70 and CMAA 74, define a limit switch as “a device designed to cut off the power automatically at or near the limit of travel for a crane motion (lift-lower, trolley traverse or bridge traverse).”

OSHA, ASME, and CMAA have all established several requirements for the installation and safe use of limit switches on wire rope hoists.

All three organizations’ specifications require that the trip setting of hoist limit switches first be confirmed via a series of tests conducted with an empty hook traveling at increasing speeds up to the maximum speed prior to commissioning. The testing verifies that the actuating mechanism of the limit switch is located so that it activates the switch under all conditions and in sufficient time to prevent contact of the hook or hook block with any part of the trolley.

OSHA, ASME, and CMAA also forbid the use of a hoist’s upper limit switch as an operating control, as this could increase the risk of equipment damage or a load drop. Prior to the start of each shift, operators are required to test the upper limit switch devices on powered hoists to verify they are functional. The devices should be assessed during frequent and period inspections as well.

In addition to these requirements, several best practices are recommended for crane or hoist operators and owners to ensure the functionality and safe use of hoists’ upper limit switches. These include:

Why Emergency Stops Are Required For Powered ...