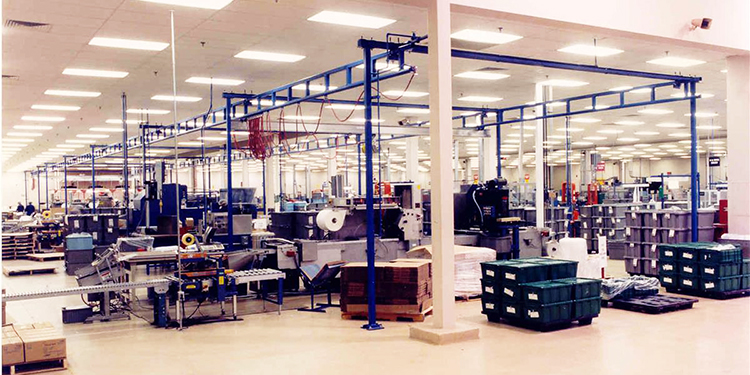 Installing workstation cranes within individual assembly and manufacturing work cells helps operators lift, lower, handle, position, and move heavy objects both safely and efficiently. Capable of handling loads up to 4,000 pounds, these systems are designed to reduce the physical exertion, fatigue, and risk of injuries associated with lifting and pushing or pulling loads. Due to the low exertion and ease of movement, in many instances workers are able to produce more throughout the day. As a result, an operation can transition from deploying multiple workers to dedicating just one to perform a specific function.

Workstation cranes come equipped with trolleys that ride inside an enclosed track, which keeps the rolling area free from dirt and debris. Special wheels enable a single worker to move loads efficiently — at times requiring just 4 to 5 pounds of force to move a 500-pound load. This takes a tremendous amount of strain off the worker’s body throughout the workday, thus increasing their physical ability to do more in less time..

Workstation cranes are dedicated to a specific area or location. They are typically equipped with a hoist, balancer, vacuum lifter, or intelligent lifting device with holding and orienting devices such as slings, grabs, spreader bars, custom end effectors and magnets. Once connected to the load, the system moves it throughout the work area, reducing the need for a worker to bend, stretch, or strain to position the item. After the load has been raised, the operator guides and positions the full system manually; alternately, a powered end truck or trolley moves it mechanically.

Two main styles of workstation cranes are offered, including:

The selection of a floor mounted workstation crane versus a ceiling mounted crane is based on numerous factors. Many older facilities may not be able to adequately support a crane from the building’s structure, which eliminates the possibility of using the ceiling mounted crane. Additionally, depending on the work being performed, there may be numerous parts, lines, pipes, or other obstructions already running overhead. At times, these can interfere with an overhead crane, making a floor-mounted system more appealing.

Regardless which type of workstation design is chosen, one of the many results of utilizing the systems is greater efficiency of the operator. The smooth rolling and ease of positioning loads remove much of the manual work from the operation. Additionally, since workers using a workstation crane are able to perform many jobs without outside assistance, other workers may be redeployed to other vital operations. This not only impacts productivity, it can be vital as companies aim to include social distancing guidelines as important parts of their safety programs.

Want to learn more about workstation cranes and how they can help your operators be both safer and more productive? The members of the Monorail Manufacturers Association (MMA) are the industry’s leading suppliers of workstation crane systems. The group offers a variety of resources—including a product certification program, recommended practices for workstation cranes and patented track systems, and more—via its website at www.MHI.org/MMA.

Overhead And Gantry Inspections 101: Learn The ...