Crane Selection Guidelines: How To Pick The Right Solution For Your Application 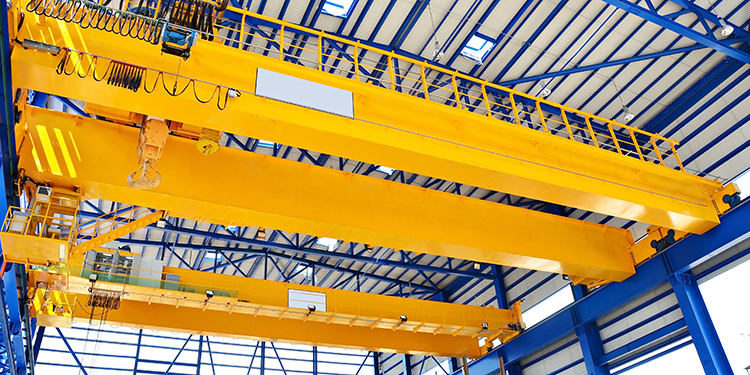 Overhead single and double girder crane equipment is engineered to lift, lower and move large, heavy and bulky loads horizontally through a facility’s overhead space. The crane’s movement (and load travel) is controlled by an operator through a rectangular area in multiple directions: laterally (side to side), vertically (up and down), backwards, and forwards. For front to back travel, the bridge beam — riding on end trucks at each end of the beam — traveling over one (or more) horizontal girders. A hoist to lift and lower the load is mounted to a trolley that moves side to side across a bridge beam either across the top of the beam (top running) or suspended from the bottom flange (under running).

But which combination is the optimal choice for a given application?

Here are a few rules of thumb to help guide you when making a selection:

Single Girder Under Running Crane – Equipped with a single bridge beam suspended on either end to two runways, this crane features a hoist that runs on the bottom flange of the bridge beam. Smaller versions (usually enclosed track systems) are often installed to handle capacities of 4,000 pounds or less. Loads from 2 to 15 tons are generally handled by either patented track or structural steel I-beam tracks. Under running cranes are typically mounted from a ceiling or  a hanging runway structure. Alternately, they can be mounted on freestanding support structures. These cranes are typically used in CMAA Class C (mid-duty) applications and with spans under 60 feet. With only one girdler, single girder cranes tend to be less expensive than double girder cranes because there’s only one span of steel used to create the bridge beam. Under running cranes, particularly patented track cranes, can interlock with adjoining cranes to allow the trolley to travel from one bridge to the adjacent bridge to increase the equipment’s coverage area.

Single Girder Top Running Crane – Again featuring a single bridge beam attached to the top of two runways, this crane offers a higher lifting range due to greater headroom space under the beam (since it is mounted on the top on the runway). When constructed in a four-sided box girder configuration, the bridge girder can handle higher load capacities and cover longer spans — typically up to 80 feet. Similar to their under running counterparts, top running single girder cranes are generally utilized in handling loads under 15 tons.

Double Girder Top Running Crane – Typically used in heavier capacity (greater than 10 tons) and higher duty applications (CMAA Class D and E ), these systems utilize two bridge beams set atop the runway end trucks. The hoist and trolley are mounted on top of the two bridge beams to create greater headroom under the crane. Because of their construction, these cranes can accommodate typical spans as long as 120 feet but can go even longer. Like the single girder top running crane, double girder models provide greater lifting height, allowing the hoist to lift a load as high as the depth of the girders, and since the hoist is mounted on top of the girders, the hook can also be raised between the girders.

Often used in conjunction with single and double girder under running and top running cranes are Jib Cranes. Mounted to the wall or the floor, these stationary cranes incorporate a cantilevered bridge (girder) supported by a stationary, vertical support on one end, allowing it to move its payload in a 180-degree arc or 360-degree circle. Its hoist is mounted on the horizontal boom. These are ideal for lifting loads in a specific work area, such as loading blanks and unloading finished parts from machines or for performing work on a component in a workcell. Jib cranes can be installed in different, application-specific ways, including to a column (either a self-supporting mast or a structural column within the building); to a facility wall; or on a runway (for lateral movement) attached to a wall.

Looking for more information on the optimal overhead crane systems? The members of the Crane Manufacturers Association of America (CMAA) represent the industry’s leading suppliers of overhead crane systems and are available to answer any questions. Additionally, the group offers a variety of resources—including buyers’ guides, engineering specifications, OSHA Alliance safety tip and fact sheets, inspection and maintenance checklists, safety seminars and more—via its website at www.MHI.org/CMAA.

Overhead And Gantry Inspections 101: Learn The ...

Why Your Next Overhead Handling Equipment Purchase ...