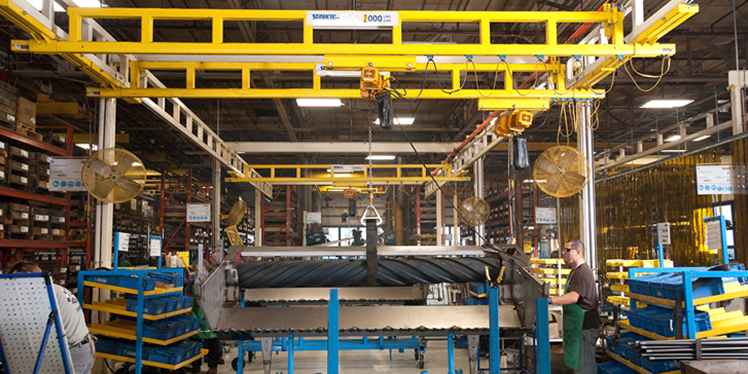 Offered in four styles — jib, monorail, bridge, and gantry — workstation cranes are installed in work cells to help operators lift, handle, transport, and position heavy objects within assembly and manufacturing operations. Yet, to ensure proper ergonomics when using a manually operated workstation crane of any style, it’s important to keep several considerations in mind when designing the system and its configuration. That’s because, unlike powered workstation cranes which utilize motors to maneuver a load in any direction within the cell, manual systems require a certain amount of ergonomic effort from the operator to move the load up and down, side to side, and laterally.

The first recommendation is to position the manual crane within the cell such that the majority of lifting and travel movement occurs in the middle 50% of the bridge span. Doing so ensures that less ergonomic force will be required to move the bridge along the runways. The closer the hoist and trolley are to either end of the bridge, the more force will it will take to move the end truck on the opposite side.

Similarly, for jib cranes, it is important to mount the pivot point so that the majority of lifting and swinging of the boom occur on the outer one-third of the crane. That’s because — like operating a lever — the further away an object is from the pivot point, the less ergonomic force is needed to move that object.

Second, in a bridge crane, it is optimal to position the bridge such that the majority of travel occurs parallel to bridge. This minimizes the need to move the bridge along the runway for positioning. Instead, the majority of movement required is pushing the trolley along the bridge to place the load in the desired location.

Third, choose the right under clearance, that is, the distance from the floor to the bottom of the bridge. This enables the load to be lifted to the proper height without being too high or outside the operator’s optimal ergonomic range, preventing excessive stretching or reaching on the part of the worker when manipulating the load. While it might be tempting to go higher than what is needed, doing so is not recommended. That’s because the additional height requires even more effort from the operator to move the load, adding time to the process and resulting both in fatigue and a higher risk of injury due to poor ergonomics.

Along similar lines, the fourth consideration is properly sizing the hoist to the load. Selecting a hoist that is sufficient (or slightly more so) for the lifting speed and weight capacity needed means that the entire workstation crane is sized correctly for the application. Conversely, over-sizing the hoist significantly will often require the bridge and runway system to be up-sized as well. This not only has the potential to take up more space in the facility, but it also creates an overall heavier system. This demands more ergonomic force on the part of the operator and can significantly increase the system’s cost.

Fifth, the workstation crane should be sized and positioned such that the hoist and its cable or chain do not have to be pulled sideways, at an angle to lift a load. Doing so is very dangerous, as it can cause the load to swing, and is therefore never recommended. Should this situation be discovered after the cell has been constructed, a telescoping bridge system can be added to allow the trolley and hoist to travel outside the envelope of the original system.

Finally, when designing the work cell layout, be sure to place the load pick-up and drop-off areas in locations that enable the worker to access without having to bend, reach or twist excessively. As with the other five previous considerations, this minimizes the risk of an ergonomic or repetitive stress injury.

Want to learn more ways workstation cranes can help your employees be both safer and more productive? The members of the Monorail Manufacturers Association (MMA) are the industry’s leading suppliers of workstation crane systems. The group offers a variety of resources—including a product certification program, recommended practices for workstation cranes and patented track systems, and more—via its website at www.MHI.org/MMA.